One of the primary problems with sending astronauts to Mars is the length of time it takes to travel the 34 million miles of space that lies in between.

With the technology we have at present, this is estimated to take anywhere between 6 and 8 months — and that is with Mars at its closest. Having a crew floating around in zero gravity inside a spacecraft for so long means that they could be physically too weak to do anything when they get there—at least for the first few days, and that could be critical for the mission as a whole. Even though Mars gravity is only one-third of Earth, it still has the potential to be debilitating for our newly arrived astronauts.

So what to do?

One solution is to build spacecraft with a rotating torus, or similar, to provide our intrepid crew with some artificial gravity. If you have seen the movie The Martian, you might have noticed that this is the type of ship they used. By providing the astronauts with some gravity during the long journey to Mars, they would be fit and ready for action when they landed. However, there are a number of problems with this, not least the enormous cost, but also the engineering challenges involved in building something that complex and assembling up in Earth orbit. Just think how long it took to build the ISS.

The other solution, of course, is to get there faster. 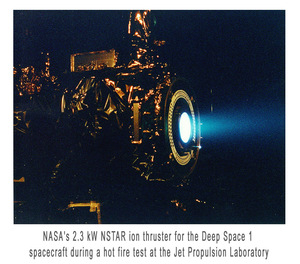 So, one of the areas I looked into when I was doing the research for Colony Mars, was what work was being done on experimental rocket engines, particularly those that had the potential to be considerably faster than conventional engines.
The first one I considered was the Ion Thruster. These are currently being used to keep satellites in orbit as well as for some deep space probes. This technology is way more efficient than a chemical rocket, which has a fuel efficiency of around 35 %. Whereas the Ion engine is around 90% efficient. Theoretically, it can reach speeds of over 200,000mph, which is insane when you think about it. By comparison, the Space Shuttle could only manage a paltry 18,000mph.

So what’s the catch?

Well, it may have very high theoretical top speed, but it has very, very low thrust, around 0.5 newtons. To get an idea of what that number actually means, imagine holding say, a dozen coins in the palm of your hand. The weight of those few coins is approximately the same as the trust from this engine—not a lot.
So, to get anywhere you need to operate it over a very, very long period of time. The thrust might be tiny, but over a long period, it can build upon itself, accelerating faster and faster. The first spacecraft to use an Ion thruster was Deep Space 1, a NASA probe launched in 1998 and acted as a test bed for advanced technologies. 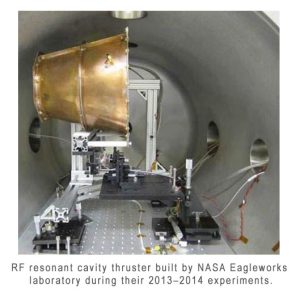 However, to be appropriately sci-fi I needed something a little more exotic, and I found it in the experimental EmDrive (aka, Radio Frequency Resonant Cavity Thruster), the brainchild of an English inventor, Roger Shawyer. It’s a bizarre contraption that defies the standard laws of physics. Mainly, it’s a microwave in a box, powered merely by electricity. How this could possibly provide forward thrust is beyond the realms of common sense physics. But it does seem to work, although the jury is still out on that.
Needless to say, it has been scoffed at by the physics establishment and vilified by rocket scientists and would have languished in blissful oblivion only for the interest shown by Chinese scientists. Once they started taking it seriously, then NASA Eagleworks soon followed. In 2014 NASA released some test results showing that a microwave, in an enclosed metal cone, can indeed provide forward motion, with potential trust values similar to that of Ion engines. The difference, of course, it that the EmDrive does not need a fuel tank, it just needs electricity. Theoretically, all your spacecraft would need are a few solar panels, and off you go.
But it’s not all good news. More recently, a German team concluded that the trust from their own tests could simply be from interference with the Earth’s electromagnetic field. If this proves to be true, then that would be the end for the EmDrive.
However, here’s where it starts to get interesting. You know that top secret space plane, the X-37B, that the US air-force lobs up into orbit every now and again? Well, rumor has it that it is being used to test an EmDrive. Even more interesting is that China has apparently been testing a device in orbit since 2016 and now plan to incorporate a version of it into their space station, Tiangong-2.
So, to conclude in true conspiracy theory fashion—something’s going on here. There’s a reason why these two powers are throwing resources at this device

Does it really work?

If any of these tests results turn out to be positive, then this would be an extraordinary breakthrough for space travel. Here is a basic engine, with no moving parts, not subjected to enormous forces, that works simply by electricity.
So are we on the cusp of a new space technology race? Only time will tell, but you can see why I chose this as the engine of choice to get Dr. Jann Malbec and her crew-mates to Mars in such a short period of time. That said, in The Belt series time has moved on and I started to think that maybe the VASMIR (Variable Specific Impulse Magnetoplasma Rocket) engine might be a real possibility by then—more on that later.