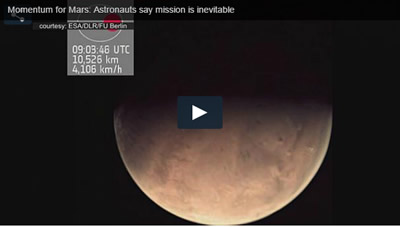 Is a human Mars mission inevitable?

For astronauts arriving on Mars for the first time it would be both inspiring and intimidating, in equal measure. It would be another giant leap for humankind, and herald in a new era in science. Yet, should we send humans there? Would it not be better to send machines rather than men & women?

“Humans will go to Mars, I’m very sure of this. You just have to look back in human history and you’ll know. As soon we learnt to build ships, we took them not only to go to the next island, we took them to sail over the horizon.”

The problem is it take a lone time to get there and hence a long exposure to radiation,

But that not the only difficulty…

“I think that on top of the technical challenges, which we should be able to overcome today, you have the challenges linked with the astronauts themselves. I would think of three mainly: space radiation and how to protect humans from those radiations. The second one is weightlessness, how to make sure that we have good countermeasures, so that the astronauts can work efficiently as soon as they arrive on Mars. And the third one is the psychological one – how can we make sure that the astronauts will be able to endure such a long trip to Mars?”

In essence, they all need to get along.

ESA astronaut Alexander Gerst says: “We humans have been explorers for millions of years and since 50 years we know how to do spaceflight, so we’re right at the beginning of this new technology, of this new age of exploration.”