“If you like intelligent characters, exotic locations and fast paced thriller action, then look no further, REACTION has everything you need for a cracking good read.”

** You can get this book for FREE by joining my Reader’s Group below!

Surveillance expert Charles Gardner arrives in Monaco to spend a few days with his daughter, who’s covering the launch of the new ITER fusion reactor for a major news channel. But that night, in the darkness of the harbor, he sees something he shouldn’t — the brutal murder of a young woman on-board a luxury super yacht.

When local Inspector, Madelaine Duchamp, is forced to drop the investigation in to the murder, Charles decides to use his own particular set of skills, and uncovers a plot to blow up the massive reactor before it goes live. Now it’s no longer just about the murder on-board the yacht, it’s not even about the reactor. For Charles, it’s about the life of his daughter who’s on-site, in the control room – a target of the attack.

With time running out, and hunted by deadly insect-drones, Charles must find a way to avert this catastrophe. Otherwise, his daughter will be dead along with hundreds of others — and the south of France will become an irradiated wasteland. 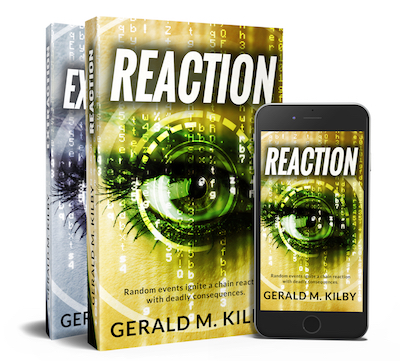 Join my Reader’s Group and get my techno-thriller REACTION and the follow up short story EXTRACTION for FREE. I’ll also keep you posted on new stuff coming out.

Where should I send your free ebooks?